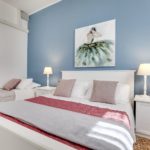 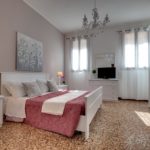 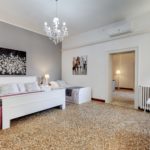 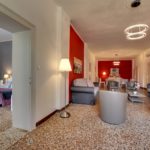 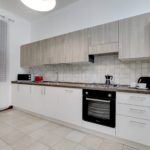 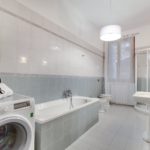 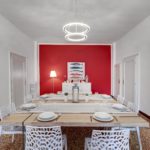 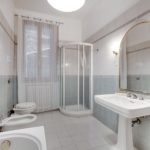 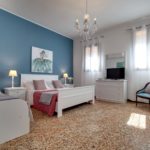 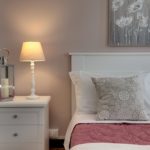 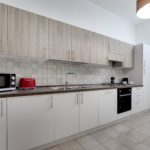 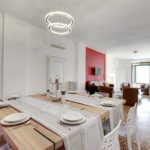 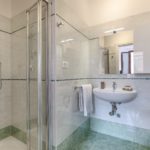 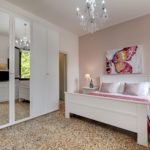 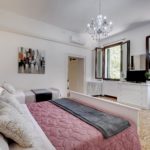 Situated in one of Venice’s most authentic and best loved places, this 210 square meters in size apartment enables to comfortably accommodate up to ten guests in its four bedrooms and three bathrooms.

Accademia Opera Deluxe has private access to Campo Sant’Agnese. A single flight of stairs gives access to this first floor apartment.
Elegant and sophisticated, this property is fully equipped with everything from Wi-Fi to air conditioning in all rooms, a washing machine and a dryer. Its elegant finishings and modern décor marry perfectly with more conservative traditional elements such as Venetian terrazzo floors.
The apartment includes a large and attractive living room with a dining area made up of two tables and chairs, a soft sit area with sofas, armchairs, TV and air conditioning to share special moments of sociability. There is a small window overlooking the square below.
The kitchen is separate and fully equipped with oven and dishwasher.
The bedroom area comprises two double bedrooms, of which the master bedroom overlooks Campo Sant’Agnese and has an ensuite bathroom with shower, and two triple rooms, one of which overlooks the square.
Each room has a television and air conditioning.
A further two large bathrooms complete the apartment: one with a shower and laundry corner (washing machine and dryer) and the other with both shower and bath tub.

The property is in one of the city’s most authentic areas, just a short distance from Zattere, a sunny quay which is a favorite destination for strollers attracted by its many bars, ice cream shops and restaurants. A taste of Gianduiotto at Gelateria da Nico is a must, at a historic ice cream shop mentioned in many novels, as is a dinner at one of the terrace restaurants on Canale della Giudecca.
For art lovers, in addition to the Peggy Guggenheim Modern Art Museum, the Gallerie dell’Accademia is just a short distance away with its collection of the best of Venetian and Veneto art and Punta della Dogana.
The area has some of the city’s most attractive churches including Basilica della Salute, a Baroque gem and the most meaningful in Venetian historical terms as it was built as ex voto to the Virgin Mary for the end of the plague. From here there are unforgettable views over Canal Grande and the San Marco basin.
Just a short distance from the apartment is Squero San Trovaso, one of the last remaining boatyards at which gondolas and other characteristic Venetian lagoon boats are repaired.

The house is easy to get to by private taxi or on public transport: the proximity of the Zattere vaporetto stop (to the south) and Accademia (to the north) makes for convenient travel around the city and easy connections with Marco Polo airport on the Alilaguna service from the Zattere stop.

There are no reviews yet.

Only logged in customers who have purchased this product may leave a review.